As a first step towards establishing an ‘Outbreak Management Team’ to tackle the climate crisis in the Netherlands, a broad group of independent experts, including university professors, have set up a Climate Crisis Policy Team (Dutch acronym: KBT). Based on unbiased expertise, the KBT will be providing advice to the new government, geared to swift introduction of effective policies with which standing climate targets can indeed be secured. The KBT strongly recommends introducing a national carbon budget for all sectors of the Dutch economy, putting a cap on permitted greenhouse gas emissions. This will lead to emergence of a price for carbon emissions, to be paid by consumers and industry alike (alongside the existing EU ETS for industry). Parties confronted with financial difficulties can be temporarily supported by income policy, without energy and climate policy being changed or weakened.

Climate change is becoming more apparent by the day, while global greenhouse gas emissions continue to rise. As a EU Member State, the Netherlands has committed itself to the 2015 Paris Climate Accord to limit temperature rise to preferably 1.5°C. While the 2018 Dutch National Climate Agreement is an important step, it will deliver no more than 34% emissions reduction by 2030, while 49% in what was agreed. Like the Covid crisis, the climate crisis requires the marshalling of all the know-how and funds available.

Because a decision on this urgent dossier can only be taken once a new government has been installed, CE Delft has teamed up with a group of experts/scientists (the Climate Crisis Policy Team, KBT) to take the initiative of formulating a series of recommendations. The KBT strongly recommends that the country’s climate policy be urgently adapted to achieve an as rapid as possible change in the behaviour of consumers (product purchase and use) and industry (investment and plant operation) – for only then can the climate target be secured.

Today’s policies are still implicitly rooted in a fossil energy system, topped off with a handful of subsidies to promote energy efficiency and zero-carbon energy sources. A crisis demands a more urgent strategy, though. Climate policy must have at its heart that zero-carbon energy becomes the default as soon as possible and that this needs paying for. Citizens and companies getting squeezed financially as a result will need to be given temporary income support, without energy and climate policy being changed or weakened. To maintain broad support for climate policy, due allowance will need to be made for international competitiveness in the case of industry and equitable burden-sharing among the citizenry. It is essential the costs of climate policy can be borne by one and all.

It is abundantly clear that CO2 emissions need to decline far faster than is currently the case. The best way to achieve this is by introducing a national carbon budget, with the government setting an annual cap on the volume of greenhouse gases that can be emitted and lowering this budget each year. This budget system would be organised through energy suppliers, who would need to have enough emission allowances for the emissions of the fuels and electricity they sell. These allowances would give the right to emit 1 tonne of CO2 and initially be auctioned by the government or sold for a fixed price. Subsequently, energy suppliers would buy and sell additional allowances on a carbon market, creating a going price. Energy suppliers will pass on the CO2 price as far as they can to their customers.

The KBT recommends that revenue from the sale of emission allowances be used to lower the tax on labour and to compensate low-income groups. In the meantime, existing energy charges (energy tax, ODE Renewable Energy Surcharge, fuel duty, vehicle tax) can be differentiated according to carbon content (electricity, gas, petrol, diesel). By introducing carbon budgets across the board, i.e. a cap on the various sectors’ emissions from which a carbon price will emerge, the government will be assured of securing the climate targets agreed for 2030 and beyond. 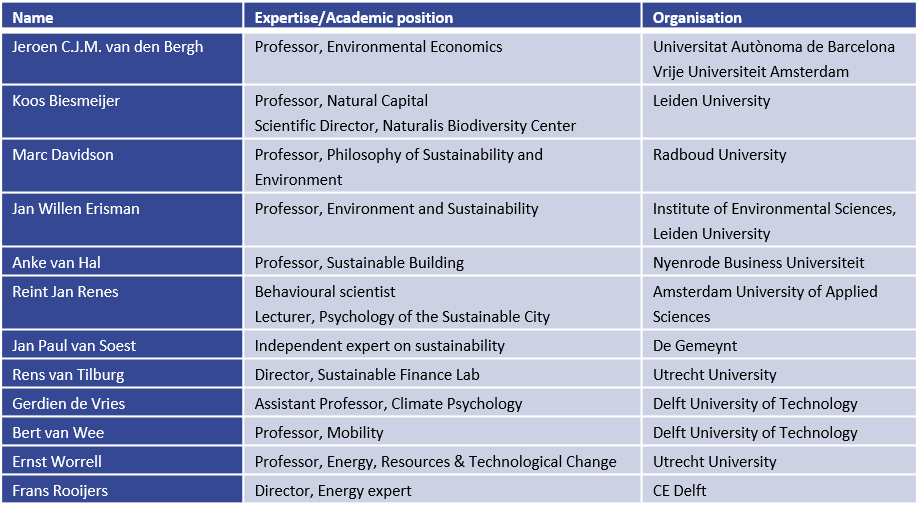