Estimate of emissions degassing inland tank vessels
At the exchange of cargos of petroleum or chemical products, ships can be degassed. This can result in emissions of VOCs (volatile organic compounds).  The sector organisations VNPI (petroleumindustry), VNCI (chemical industry), VOTOB (tank storage and handling) and the Port of Rotterdam have asked CE Delft to investigate the current size of degassing in the Netherlands.

Actual emissions have been investigated for a series of 43 products, according to the standard national methodology, using a database of inland shipping transports for the year 2011. Results show that emissions amount to 1.79 Kton, or 1.2% of Dutch national VOC emissions. The contribution might be larger for specific toxic components, such as benzene. The estimates have a considerable level of uncertainty, in the order of 55%.

In 2003 a similar study has been conducted, investigating emissions from degassing in the year 2002. Comparison of actual emissions with the 2003 results, using identical parameters, indicates that emissions have increased with approximately 24%. The increase is due to a large grow in the volumes of transports of 75%. However, the increase in emissions is lower, due to an increase in dedicated transports (more identical or compatible next loads), and a strong increase in the use of double-hulled ships. 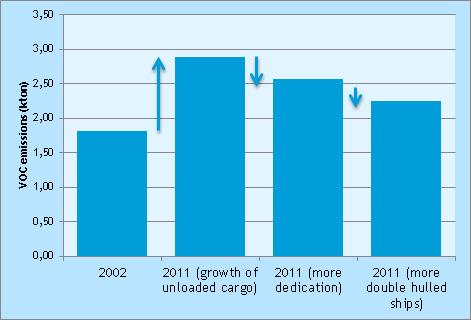