Why slower is better

Driving at lower speeds is better for the climate. In a pilot study CE Delft has estimated the potential CO2 savings arising in various scenarios with tighter motorway speed limits. Lowering the speed limit for cars to 80 km/h can reduce transport CO2 emissions on highways by 30% in the longer term. 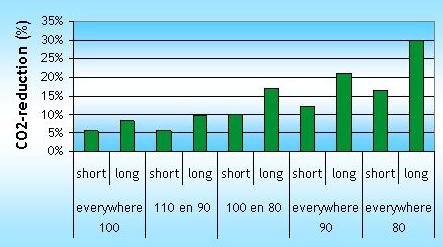 It is common knowledge that, on average, vehicles burn less fuel per kilometre at lower speeds.

In the long term the CO2 savings resulting from the reduction in car-kilometres will become increasingly pronounced, as structural behavioural change sets in (people moving closer to their workplace, shops relocating closer to consumers, etc.).

Reduced CO2 emissions are just one of the benefits of lowering speed limits. There will also be improvements in terms of air pollution, noise nuisance and possibly congestion and traffic safety, too. Lowering motorway speed limits also has its downside, though. On average, people will be on the road for longer for a given journey and their annual mileage will be lower. From the perspective of economic welfare, both the lower speed and the reduced volume of traffic count as costs. A follow-up study on the social costs and benefits would enable calculation of ‘optimal’ speed limits.